Day 1:
In preparation for new year 2010, I did backpack to Pangandaran with my six friends. We departed from Cicaheum bus terminal, Bandung, West Java, took a bus called Budiman, headed for Pangandaran, just paid IDR 35.000 for this 6 hours journey. But if there’s a traffic jam on the way, it took 8-12 hours. Oh la la! But thanks God, we didn’t get stuck with traffic jam. We booked a lodging in East Coast of Pangandaran. But first of all, we took “becak” by paying IDR 15.000 from the bus terminal to go to the lodging. 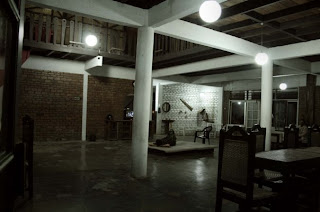 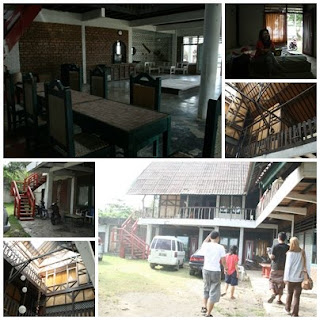 Having arrived at the lodge, we decided to take dinner at small restaurant near fish market, East Coast of Pangandaran. Not too crowded, yet less pricey than the others, about the quality, it’s quite delicious. We ordered seafood there (yea, since it was near the coast so the main offer was seafood). After dinner, we wandered around the traditional market which sold variety handicrafts, some of us bought anything from there which has averagely reachable price. Going back to the lodge, we were not going to bed too early, so we spent the night with playing cards. 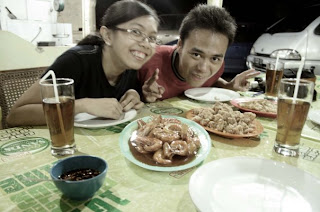 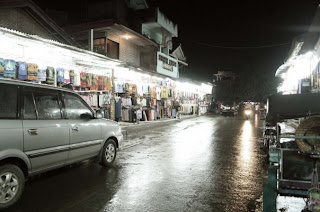 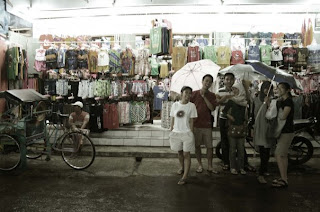 We had a plan that day, enjoyed the sunrise but unfortunately the sun was obscured by the rain clouds that was still keep remained from yesterday. Instead of the sunrise, we just enjoy the morning breeze in the coast breakwater. Afterward, we went back to the lodge to take breakfast, yeah it’s instant noodle time :D 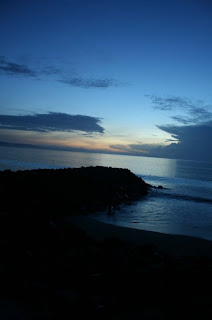 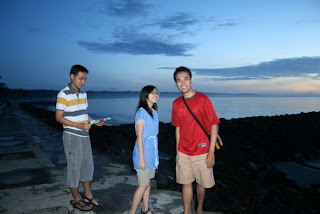 That day, we decided to go to Green Canyon, Batu Karas, and Batu Hiu. We could take “becak” or by foot from lodging to bus terminal, but by all the considerations we got, finally we went to bus terminal by foot. Three destinations we wanted to head for was located far enough from Pangandaran Beach. It took about 1 hour. At first we planned to ride public bus with the route Pangandaran-Cijulang, then continued by riding “ojeg”. But the second opinion came up when we were offered by some people there to rent “angkot” which could take us to those places we wanted to go. After passing a hard time for discussion about the price, finally we were at the final decision, we would go there by angkot for IDR 200.000 :D

After we had arrived Green Canyon, we bought the ticket for the boat (IDR 15.000/person). Actually, 1 boat can be filled for 5 passengers and 2 guides. Because all of us were 7 persons, so I and my girlfriend (Rista) were separated from the others. Fortunately, there was one family with 3 persons searching for another passengers to take boat together. So we offered ourselves to join them.

We got on the boat and drifted through the green-colored river. We could see a kind of a rock cliff (like Grand Canyon but it was much smaller) in the headwaters. The cliff created a high cave with stalactite in upper side. We got off the boat hardly, passing other boats, and climbing rocks. Actually, we could swim over there and did body-rafting. Because the girls wouldn’t, so we just enjoy the water splasing from the top, LOL. 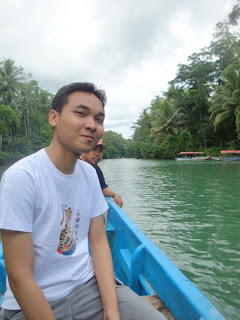 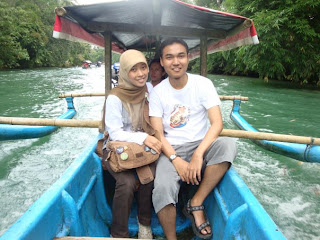 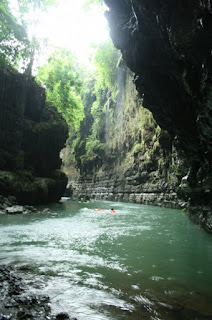 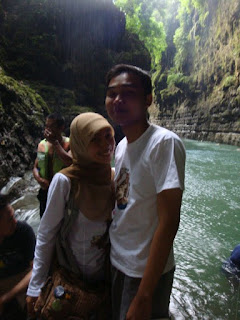 Having enjoyed drifting by boat in Green Canyon, we continued the journey to Batu Karas which was located far enough. Fortunately we took angkot that time, because we just pay IDR 10.000 for angkot entry fee, it would be different if we entered Batu Karas individually (Maybe! I myself was not sure about this, LOL). Batu Karas is a sheltered beach and point break that has quite reliable surf, a heaven for beginner surfer. Batu Karas seemed more beautiful than Pangandaran Beach. We took some photos, walked through the coastal area, or even swimming. After that, we took lunch in “warung”. Since it was “warung”, so we could always order meal with a cheap price (about IDR 7000). After that, we were headed to Batu Hiu. 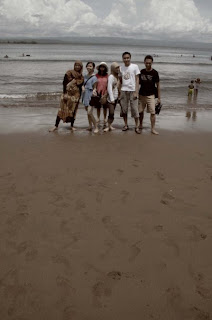 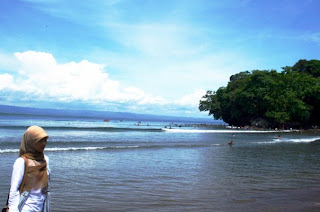 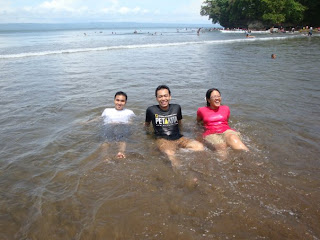 Batu Hiu is a beach between Pangandaran and Batu Karas. Batu Hiu itself means Shark's Rock which is a coastal rock having the shape of a shark. To emphasize that, the entrance gate was designed with the shark-shape looks. About the view, it was awesome. It's nice for relaxing and enjoy the outlook over the sea from the cliff surrounded with many large pandanus trees. We took photos there, since it was really beautiful landscape which can be transformed become romantic spot or even the sport area.

After we had some pleasure there, it’s time to go home, we felt so grateful to angkot’s driver. He’s so kind that he have a will to take us wandering around Pangandaran and its surrounding area with extra hours. There might be a pleasure time till the incident happened. The key for the room got loooooost. It’s time to panic x_x 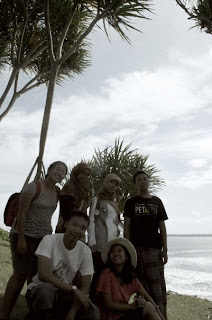 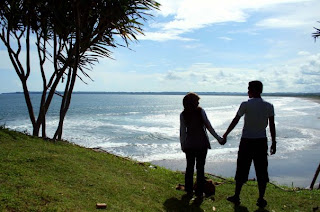 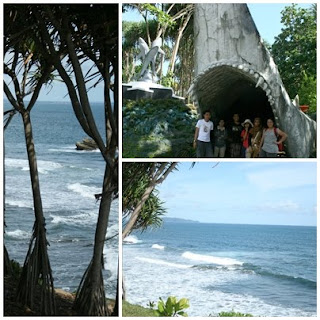 The panic won’t be lasting long since the lodging owner had the door opened. Before the clock hit the new year, we were out to go to west coast. It was too crowded. We did seafood party again in the same restaurant and watched the fireworks blooming in the east coast when the time was kicking new year. HAPPY NEW YEEEEAAARRRR!!!!!

As soon as the fireworks was going to end, the drizzling rain fell down, followed by the heavy rain afterward -_- 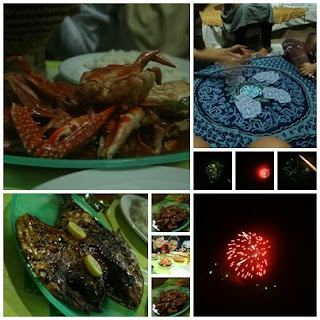 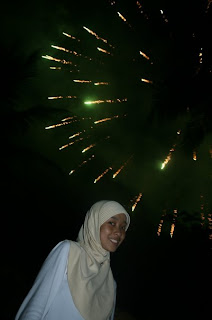 PS: the photos were taken by Rista, Retta, and Ira
Posted by Eriek Sobieski at Monday, May 10, 2010

so far,,lets go vacation again!!! cant wait to go backpacker again with all of this people again