Here ya gooo!
Now is the time for me to tell ya my tour experience visiting Jogjakarta. In fact, I went to Jogja not in purpose of traveling, but attending wedding celebration of my friends. However, wise men said one day, "When there's a chance, just take it!" Yeah, that's it that I was supposed to do. After attending the wedding, me and my friends wandered around Jogjakarta, visiting ancient temples like Borobudur, Prambanan, Candi Sewu, and finally Keraton (the palace of Jogja).

I'm afraid I can't tell ya the whole story because I myself can't remember about the ancient history of Indonesia. From Elementary School exactly, I always remember and I'd tell you that .... I Hate History! Nevertheless, I do love Indonesia. Fortunately, I found some information about that so don't worry. Your curiosity would be disappeared after I gave it to you. Check it out!

Based on information here, Borobudur was built by King Samaratungga, one of the kings of Old Mataram Kingdom, the descendant of Sailendra dynasty. Based on Kayumwungan inscription, an Indonesian named Hudaya Kandahjaya revealed that Borobudur was a place for praying that was completed to be built on 26 May 824, almost one hundred years from the time the construction was begun. The name of Borobudur, as some people say, means a mountain having terraces (budhara), while other says that Borobudur means monastery on the high place.

Borobudur is constructed as a ten-terraces building. The height before being renovated was 42 meters and 34.5 meters after the renovation because the lowest level was used as supporting base. The first six terraces are in square form, two upper terraces are in circular form, and on top of them is the terrace where Buddha statue is located facing westward. Each terrace symbolizes the stage of human life. In line with of Buddha Mahayana, anyone who intends to reach the level of Buddha's must go through each of those life stages.

The base of Borobudur, called Kamadhatu, symbolizes human being that are still bound by lust. The upper four stories are called Rupadhatu symbolizing human beings that have set themselves free from lust but are still bound to appearance and shape. On this terrace, Buddha effigies are placed in open space; while the other upper three terraces where Buddha effigies are confined in domes with wholes are called Arupadhatu, symbolizing human beings that have been free from lust, appearance and shape. The top part that is called Arupa symbolizes nirvana, where Buddha is residing. 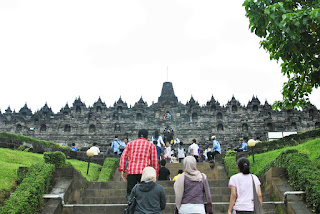 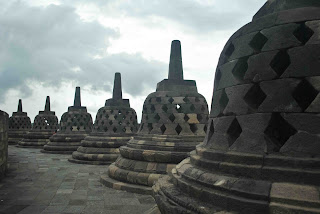 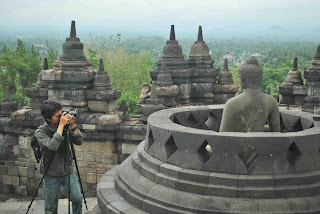 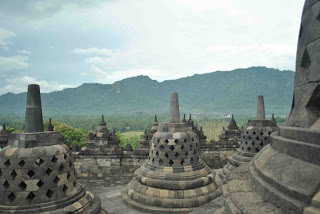 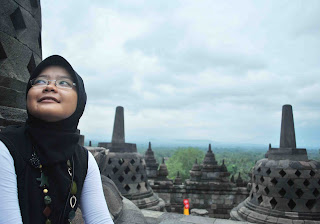 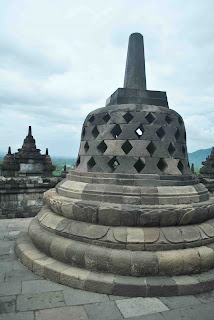 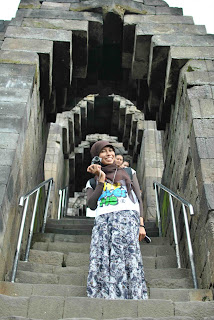 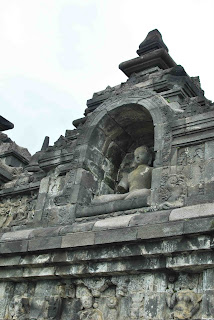 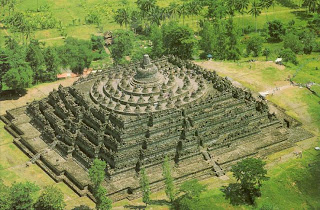 Prambanan temple is extraordinarily beautiful building constructed in the tenth century during the reigns of two kings namely Rakai Pikatan and Rakai Balitung. Soaring up to 47 meters (5 meters higher than Borobudur temple), the foundation of this temple has fulfilled the desire of the founder to show Hindu triumph in Java Island.

There is a legend that Javanese people always tell about this temple. As the story tells, there was a man named Bandung Bondowoso who loved Roro Jonggrang. To refuse his love, Jonggrang asked Bondowoso to make her a temple with 1,000 statues only in one-night time. The request was nearly fulfilled when Jonggrang asked the villagers to pound rice and to set a fire in order to look like morning had broken. Feeling to be cheated, Bondowoso who only completed 999 statues cursed Jonggrang to be the thousandth statue.

Prambanan temple has three main temples in the primary yard, namely Vishnu, Brahma, and Shiva temples. Those three temples are symbols of Trimurti in Hindu belief. All of them face to the east. Each main temple has accompanying temple facing to the west, namely Nandini for Shiva, Angsa for Brahma, and Garuda for Vishnu. Besides, there are 2 flank temples, 4 kelir temples and 4 corner temples. In the second area, there are 224 temples. 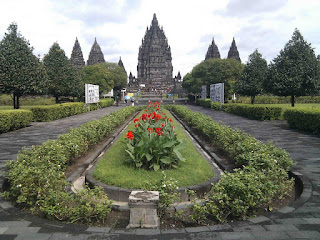 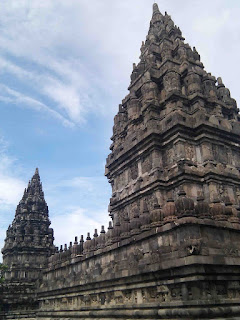 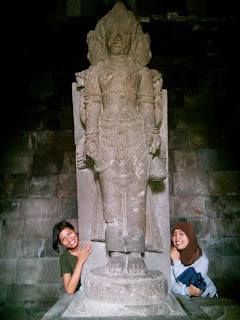 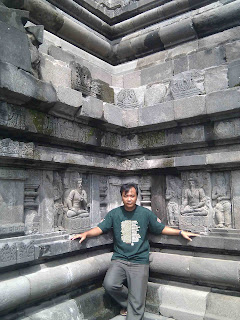 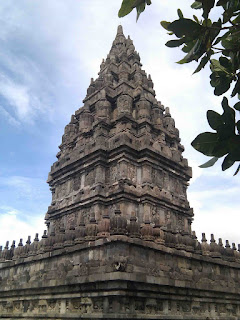 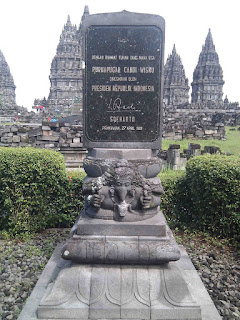 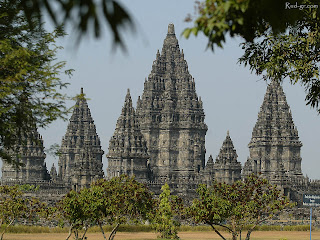 About 800 meters north of Loro Jonggrang, Candi Sewu is actually a Buddhist monument and it is the second largest Buddhist Temple in Central Java after Borobudur, though built by the same Hindu King, Rakai Pikatan.

Rakai Pikatan married to a Buddhist and most of his subject retained their old religion after the return of Sanjaya Dynasty. The fact that this temple was built near Prambanan Temple which is Hindu Temple indicated that the Hindus and Buddhist lived in harmony. It is believed to be a Royal Temple and was one of the religious activity centers in the past. Based on the inscription in 792 AD which was found in 1960, the name of the temple complex was probably “Manjus’rigrha” (The House of Manjusri). Manjusri is one of Boddhisatva in Buddhist teaching. Sewu Temple was probably built in the 8th century at the end of Rakai Panangkaran administration. Rakai Panangkaran (746 – 784 AD) was a popular King from the old Mataram Kingdom. 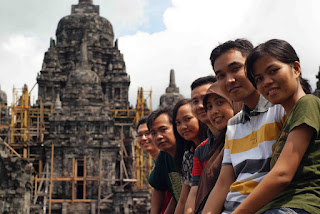 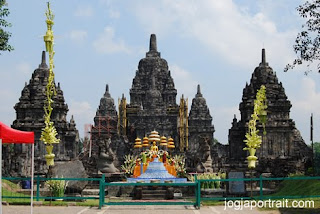 Karaton, Keraton or Kraton, originates from the word ke-ratu-an that means the place where the queen/king lives. Simple explanation of its broader meaning is that all structures and buildings in the Kraton area have significant meaning related to essential Javanese philosophy of life, namely Sangkan Paraning Dumadi that means the origin and the destination of human being.

Not only culinary tour and historical buildings, you can also dig a new lesson by learning how to make batik cloth, kite, music, with expert teacher in its field; Pak Hadjir (batik teacher whose name is well known by world). Kraton Jogja, offers more than just a cultural tourism. 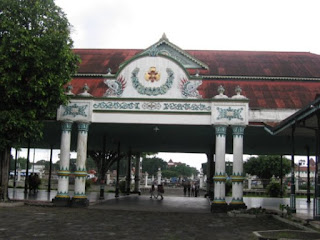 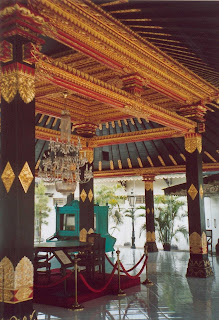 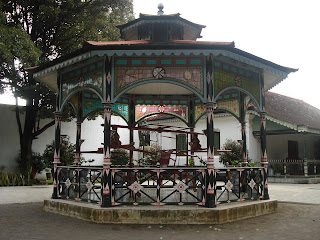 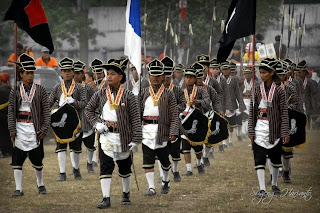 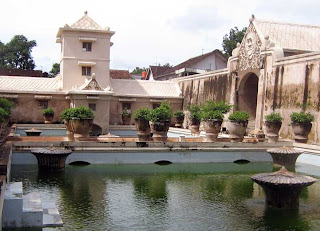 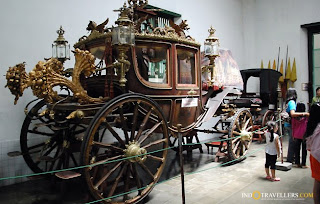 *The photos were taken by me, Dina, and many sources.
Posted by Eriek Sobieski at Sunday, August 15, 2010

I love the exotis jogja