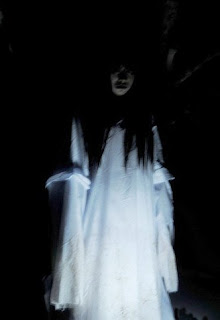 Kuntilanak figure is depicted in the form of a beautiful woman. Kuntilanak is described as a creepy ghost who'd like to threaten the villagers for revenge. When she appears, she is always accompanied by fragrant flowers from frangipani. It is said that men who are not being carefully, could be killed after kuntilanak transformed into the blood sucker. Kuntilanak also loves to eat babies and harm pregnant women. In the scary stories and horror movies on TV Malaysia, kuntilanak is described to who kill prey by sucking their blood in the neck, such a vampire always did. However, based on Sundanese tradition, kuntilanak does not have a hole in her back and only interfere with the appearance alone. The kind of ghost who has a hole in the back as described above is called Sundel Bolong. Kuntilanak reportedly also loves to live in a certain tree as a place to reside. 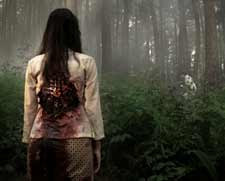 Sundel bolong in the myth of a Indonesian ghost is depicted as a woman whose long hair and white long-dressed. There's also described about the formation of holes in the back of a slightly closed her long hair so that the organs in the abdomen could've been seen. It is said that Sundel Bolong died because of being raped and gave birth to her son from the grave. Usually Sundel Bolong is also described loves to take the babies who had just been born. 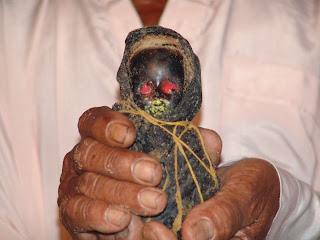 Toyol (Javanese: thuyul) in the mythology of the archipelago, especially in Java, is a ghost intangible child or a runt with a shaved head. Other depictions that people don't deal was a silvery skin, socialize (it means that toyol has communities and leaders), and their voice is like a chicken. Toyol be employed by a human employer for certain reasons, mainly stealing (money). To counteract tuyul, people put crab in the corner of the house because tuyul likes crab so he will forget all the main errands. Tuyul is believed comes from people who miscarried fetuses or infants who died at birth. Because it comes from the baby, tuyul has the same characters withchildren: likes to play (at midnight). 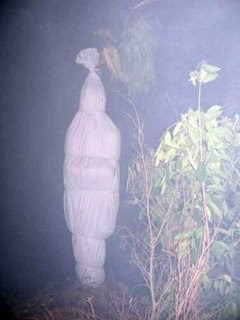 Pocong is depicted in many version. It is said, Pocong has a green face with empty eyes. The other portrayal stated, Pocong has flat-face and has a hole or hollow eyes covered by cotton with pale faces. Those who believe in ghosts assumes, Pocong is a form of protest from the dead who had forgotten to open the head bond prior to his grave. Although Pocong is often portrayed in the movie that he'd moved his body by jumping, but the myths stated Pocong moved by floating. This may be because it's just the movie - Pocong cast could not move his legs so that they just able to move by jumping up and down. Belief in the existence of Pocong is only came up in Indonesia, especially in Java and Sumatra. Although the description based on Muslim tradition, people of other faiths also were able to recognize existence of this ghost. 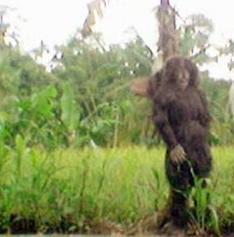 Genderuwo is a type of the genie or spirits of a big-body and reddish black colored-skin ape-like human, his body is covered with dense hair growing in the entire body. Genderuwo is especially known in the community from Java (Sundanese called "gandaruwo" and the Javanese called it "gendruwo"). Their favorite habitats are watery stone, old buildings, large trees or shady corners of the quiet and dark valley. The domicile center of this creature is believed to be in Donoloyo Teak Forest, Sloghimo district, about 60 km to the east side of Wonogiri, and in Lemah Putih, Purwosari, Girimulyo, Kulon Progo about 6 km to the west of Yogyakarta. 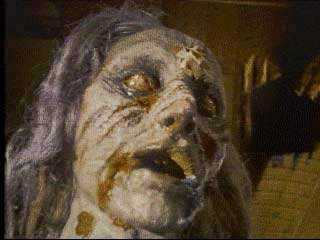 Wewe Gombel is a term in Javanese tradition, which means evil spirit or ghost that likes stealing the children, but did not harm them. It is said that the stolen children are children who abandoned and neglected by her parents. Wewe Gombel will usually scare parents of the child upon their attitude and treatment to their children until they are realized. After the parents of child had realized, Wewe Gombel will return their son/daughter.

According to the story, Wewe Gombel is the spirit of a woman who died committed suicide because being pursued by the community for having killed her husband. The incident occurred after the husband of the woman was having an affair with another woman. The husband did it because his wife could not give him children. Finally, she was shunned and hated her husband and then excluded until she became mad and homeless.

Wewe Gombel called because the incident occurred in the area in Gombel, Semarang. If we drive from Jatingaleh toward Banyumanik, it will show the former beer ads. That's the location where Wewe Gombel usually lives. Some people mentioned that the location is a kingdom of ghosts. According to the story, it caused a hotel located on the hillside location Gombel become bankrupt.

In Balinese mythology, Leak was the wicked witch. Le means witches and ak means evil. Leak can only be seen at night by shamans of leak hunters. In the afternoon he looked like ordinary people, while at night he was in the cemetery to find the internal organs of human body which are used to make magic potions. Magic potion that can transform leak shape into a tiger, monkey, pig or the like Rangda. If necessary, he can also take the organs from living people. 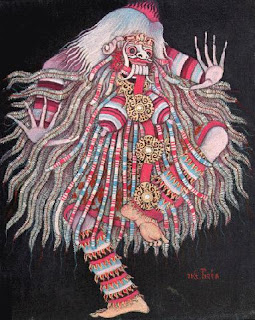 Rangda is the queen of the leak in the mythology of Bali. This fearsome creature is to be said often kidnap and eat children and lead the wicked witch army against Barong, which is a symbol of good strength. Told that the queen Rangda most likely comes from Manendradatta who lived on the island of Java in the 11th century. She was exiled by king Dharmodayana because she was accused doing witchcraft against two queens of his own. According to the legend she had his revenge by killing half people in the kingdom, which later would be owned by her and Dharmodayana's son, Erlangga. Then he was replaced by wise man. The name of Rangda is coming from the meaning of a widow. Rangda is very important for Balinese mythology. Battle against Barong or against Erlangga are often exhibited in the dance. This dance is very popular and an important legacy in the tradition of Bali. Rangda described as a woman with along disheveled hair and long nails, scary face and teeth sharp. 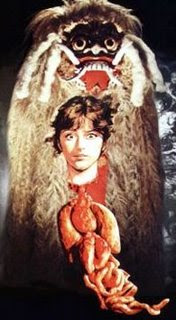 Kuyang an intangible phantom human head with the organs of the body without the skin attached and limbs that can fly to find the baby's blood. This creature is popular in Kalimantan. Kuyang is actually a man (woman) that executes the teaching of black magic to achieve eternal life.

At noon, a kuyang will behave as an ordinary person, but he usually wore robes. In the night, kuyang will fly to find the baby's blood or parturition blood to be sucked as a means of increasing his power. People usually see kuyang fly like a giant bird. To deal with it, the victims need to use a broom or banged house furniture like a pot or pan. 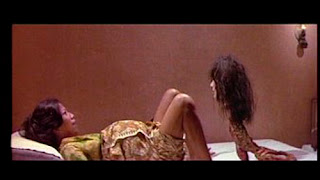 According to stories, legends or beliefs of the Minangkabau, Palasik is a kind of supernatural beings. Palasik is not a ghost but human beings who have high-level black magic. Palasik terribly feared by mothers of Minangkabau who has a toddler because palasik likes to eat infants / toddlers, both still in the womb or the dead (buried), depending on the type of the palasik. Palasik power is hereditary. If the parents are a palasik then her son is going to be palasik. In general, palasik do works by detaching their head. There was a body that runs for ate and there was also the head hovering foraging.

Geez.. That some creepy stuff there -_- Anyway, why do you write this kind of thing when you're still afraid staying alone in the office at night ;p

i'm just jelloing, jobless right now ... and wanna lazy around. Don't take it seriously, long time no blogging so it would warm me up to start pour anything i feel, yeah .. what i feel is creepy, hardly to explain, sometimes makes me cry but it won't come up.

just one sentence "wong edian...."
to read this article, I block the picture, don't wanna see the p***** picture
hahahahaha

@dindun:
hahaha, be tough!
those ghosts will be always at your side ....

The Sundel Bolong also have a mouth in the back of their neck, and eyes in the back of the head, hidden by hair. Must stitch the mouth closed to return them to normal. Got the info from Haunted Times magazine.