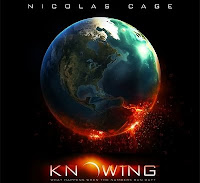 Today, I use the holiday time to watch movie together with my friends. It's been a long days before, I have dealt to watch this movie I really wanna see and curious about. The title is "Knowing", starred by Nicolas Cage. Have you ever watched this movie? I guess some of you have watched it, and had a plenty of opinion about this movie.

Okey, about my opinion. Overall, it was so thrilling me up at the beginning, but ... from the middle to the ending part, this is soooo trash. I feel disappointed because I'd been attracted and intimidated to imagine some tension circumstances at the beginning, but in the end it really fools me after all. The weird thing is when some strangers out of no where, chasing the kids, showing us that the movie is spooky enough to be science-fiction or thriller movie which based on what-on-earth matter. Moreover, when the strangers is actually an alien to bring the child to the safest place. What the hell is that? It makes us all laughing, because the movie lost control to bring its genre.

So, if I may remake this movie, I want to make some modification in the alien part. I have never dealt with it in order to keep the flow of the genre. Maybe I want the alien part is modified to be despair part which makes the movie become sad-ending, or maybe I will modify to be the solution part which makes it is happy ending after all. It shall be better, ain't it?

And how about your opinion?
How will you modify the movie to remake the alien part?

In 1958, as part of the dedication ceremony for a new elementary school, a group of students is asked to draw pictures to be stored in a time capsule. But one mysterious girl fills her sheet of paper with rows of apparently random numbers instead.

Fifty years later, a new generation of students examines the capsule's contents and the girl's cryptic message ends up in the hands of young Caleb Koestler (Chandler Canterbury). But it is Caleb's father, professor John Koestler (Nicolas Cage), who makes the startling discovery that the encoded message predicts with pinpoint accuracy the dates, death tolls and coordinates of every major disaster of the past 50 years.

As Ted further unravels the document's chilling secrets, he realizes the document foretells three additional events—the last of which hints at destruction on a global scale and seems to somehow involve Ted and his son. When Ted's attempts to alert the authorities fall on deaf ears, he takes it upon himself to try to prevent more destruction from taking place.

With the reluctant help of Diana Wayland (Rose Byrne) and Abby Wayland, the daughter and granddaughter of the now-deceased author of the prophecies, Ted's increasingly desperate efforts take him on a heart-pounding race against time until he finds himself facing the ultimate disaster—and the ultimate sacrifice.

if i were the director, instead of alien presence, i'll prefer whispering spirit..i think it would be better than alien, huh?
well...that's just my opinion

ummm...and erase the ending part (the tree and bushes seems so ridiculous)