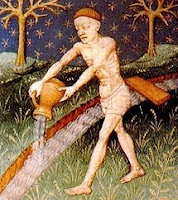 
There is hardly any person on this earth whom an Aquarius man doesn't like. He is a people's person and almost every second person he meets becomes his friend. If he likes you, you are one of the many people he has befriended. It is when he doesn't like you at all or he likes you way too much that there are chances he has noticed you from amongst his numerous pals. As per an Aquarian male, the best way to pass the time is to probe into people's life and know their innermost feelings.

The same doesn't hold true for himself. He wants to hide his feelings from everyone and deliberately makes his reactions complex, just for the fun of fooling others. Love is just another experience for him, till he has been driven to the point of the altar. For him, all the people he has met hold a special place and special value. In the case of an Aquarian male, everyone is special, including those people whom he hasn't met yet. Selfishness is not one of his personality traits and he does not like small-mindedness.

His ideals are quite high and he seeks change way too often. Then, suddenly one day, he may become totally calm and composed. It will take a lot of effort on to assure an Aquarius male that he has become interested in one woman above mankind. After the shock is over, he will become an extremely considerate lover. Then, he may realize that he is neglecting the rest of the world for her and the consideration might diminish just a little. If you are thinking of playing games with an Aquarius man, ensure that what he discovers in the end is worth all that play.

In case it is not, he will just shrug and move on to the next mystery. Open books do not entice him and intriguing him will be your best. An unsuspecting female might feel way too important when he tries to probe her feelings. Then, she comes to know that he is as much interested in the bus boy or the new waitress. 'Poof', there goes her dream. Slowly and gradually, she cools down and finally, moves on to a more passionate guy. The Aquarian guy will sigh a little at her departure and then, get on with his next mystery.

He will never ever tolerate a person taking undue advantage of his goodness. Then, he can turn scathingly bitter and can take some shocking actions too. If he does something likes this to you, don't take it with your mouth shut. He likes a woman who holds her ground. The characteristics profile of an Aquarius guy shows a fetish for cleanliness and personal hygiene. In some men, it may become too much to digest. However, we are talking about the moderate ones. He will not go to many extremes to woo you, but there will be no dearth of romantic gestures either.

There are maximum chances that he will not be too comfortable with the whole idea of getting married. Infact, he usually looks for a female who acts as his best buddy, but makes no emotional demands. He isn't even good in expressing his love through physical gestures. 'I Love You' will take a long time to come and even after that; don't expect the issue of marriage to pop out next. He will churn out any excuse he can think of, to avoid it for as long as he can. Trying to invoke jealousy will not work, since he is not the one to come running to claim you.

He will resign himself and say that he knew he didn't deserve you. If you haven't played such tricks, then wait. One day, though much time later, he will realize that all his friends are married. Sensing this as a mystery he hasn't solved till date, he will propose you out of the blue. Jealousy and possessiveness do not define his personality. An Aquarian man will never ever doubt you or be suspicious of your activities. If and when, he becomes jealous, he will never let you know about it.

You will never have to worry about his loyalty too. He is not one of those who engage in dishonest relationships. Though you may get frequent reasons to be jealous, since he is so interested in people - both males as well as females. If you have asked him something, trust that his answer will be honest. It is better not to doubt an Aquarius man, or he can cook up the wildest story to add fuel to your suspicion. He will have his silent spells once in a while and during those periods, it is better to leave him alone.

He will come back soon, all happy and gay. With him, you will never to worry about money. It will somehow come into his hands. Don't be extravagant with the finances or he will get hurt. Nevertheless, he will have outbursts of generosity every now and then. As fathers, most of the Aquarian men encourage their kids' imagination. They are patient listeners and good at math's problems too. Make sure that you do not neglect you Aquarius husband when the kids come along. At the same time, don't be on the phone with your kitty friends when he needs you.

He married you so that he could have you around him all the time. So, always be there like a good wife and a good mother. An Aquarian man seldom forgets his first love, so make sure that you are the first girl who made him feel special. He may not be so romantic, but every now and then, he comes up with such beautiful lines that you feel as if you are soaring in the sky. He may forget birthdays or anniversaries, but suddenly he will say something so meaningful to you that will make up for all the lost time!

You will find the friendly Aquarius in almost any and every group you mention, be that of the mountain climbers or the actors. Infact, there are numerous Aquarians in the list of the famous celebrities. As a proof of this, we have given the names of some famous Aquarian celebrity below.