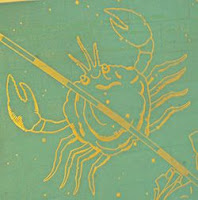 
A Cancer man will come across as an extremely shy person, who speaks less and minds his own business. He is not one of those who tell everything about themselves in the first meeting itself. Infact, it will take a large number of meetings to get even a little close to him. Cancerian male may seem to a different person every time you meet him. He may be nervous and fickle one moment; extremely confident the second minute and too shy the very next. His frown can easily turn, first, into smile and then, into a laugh.

A Cancerian guy may get sad and melancholic at times and then, you will feel like putting your arms around him and comforting him. Then, suddenly his wistfulness will vanish and he will be sparkling with wit and humor. He is a true romantic and sees fairytale dreams frequently. However, he is as close to reality as anyone can be. Baffled? Don't worry, it will take some time, but you will start understanding your Cancerian man slowly and gradually. The changes in him do not mean a changing personality like the Geminis.

It is just a change of moods and he will soon be his usual self again. The basic characteristics profile will, however, remain the same. Just like a crab, he retreats into a shell when his emotions are hurt. The shell is his haven and he will remain there till he is ready to face the world again. Cancerian men may look harsh and distant at times, but inside they are very gentle, kind and affectionate. Rudeness is not one of their personality traits. It just acts a cover to hide their true, vulnerable feelings.

A Cancer man needs to feel secured of your love every now and then, so don't forget to say 'I Love You' everyday. The same goes for money too, debt makes him uneasy. He is the one who always pays his bills on time and he likes saving more than spending. He is not stingy, but he is also not extravagant. However, a Cancerian male won't sacrifice his taste and style in the name of economy. Economy for him means getting the worth of money he spent. Quality plays the utmost importance as far as he is concerned.

A Cancer guy is very conscious of his looks, his house, his car and everything that surrounds him. His clothes need to have that perfect cut, his car that perfect shine and his food that perfect taste. He is not one of those wild men who like going against the usual norms, and sophistication is something he can't live without. There is another thing a Cancer male cannot live without - talking about his Mommy Dearest! She is most likely to be there in his every second conversation.

In the other extreme, he will be totally detached from her. However, his relationship with his mother will never be casual and moderate. It has to be either of the two extremes and the first one is the most likely. At the same time, he will be the most important person in his mother's life. Make sure you pamper him as much and give him as much attention as his mother. Chivalry is in his nature, unless you give him reasons to be otherwise. A Cancerian guy may take sometime to judge you as his probable soul mate.

However, once he is sure, he will shower you with love, care, admiration and gifts. At the same time, you will be expected to meet his standards, which may be quite high. If he has decided you are the one he wants to live his life with, he will pursue you with fierce determination and make you fall in love with him. Now, we talk about the qualities of a Cancerian guy as a father. He will be totally proud of his son and fiercely protective of his daughter. He will be extremely patient with them. With a Cancerian man, there is one thing you and the kids will never be short of - Love!

Numerous Cancerian people have made it to the topmost rung of their career. They have become famous and are counted amongst the celebrities. In the following lines, we have provided the names of some of the most famous Cancer personalities: