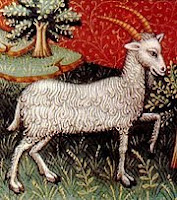 The compatibility between the zodiac signs of Aries and Capricorn is not too bad. Both of them are highly motivated individuals, who know how to move ahead towards goals. However, their ways of doing it may differ from each other and this may create tensions in the relationship. Aries is more focused on independence, creativity and autonomy. Capricorn, on the other hand, believes in following a well-defined and well-planned path, which is consistent and stable. Social norms, strict schedules and sticking to plans are not Aries' cups of tea.

Capricorns work better in an environment where there are hierarchies, role definitions and proper order. Another area of clash in this love match is social customs and traditions, which Aries find hard to and Capricorns love to, adhere to. Even the impulsiveness of an Aries individual is not likely to go down too well with a Capricorn. On the positive side, Aries can bring hope, liveliness and enthusiasm into the life of the Capricorn, who, in turn, can teach the former the importance of organization and patience. This match will need lots of tolerance.

Aries Man and Capricorn Woman
The basic personality traits of an Aries and a Capricorn are likely to clash with each other. Both the individuals are strong headed and are least likely to compromise much. His strong opinions may not gel with her viewpoints and this is when the problems will crop up. He is not the one to change his mind once he has made it and she may not be able to cope up with this. Even the money front wouldn't be too good as an Aries man is prone to extravagance, which a Capricorn woman dislikes. For this match to succeed, she will have to back down a little.

Aries Woman and Capricorn Man
If you want this match to be successful, concentrate on adjustments and compromises. The practicality, somberness and stability of a Capricorn man is entirely opposite to the enthusiasm, vivacity and spontaneity of an Aries woman. He finds it difficult to express himself and she is way too expressive about everything. Though this match is difficult, it is not impossible. Patience and tolerance on both sides can really strengthen the bond. Infact, together, both of them can attain almost anything in this world.